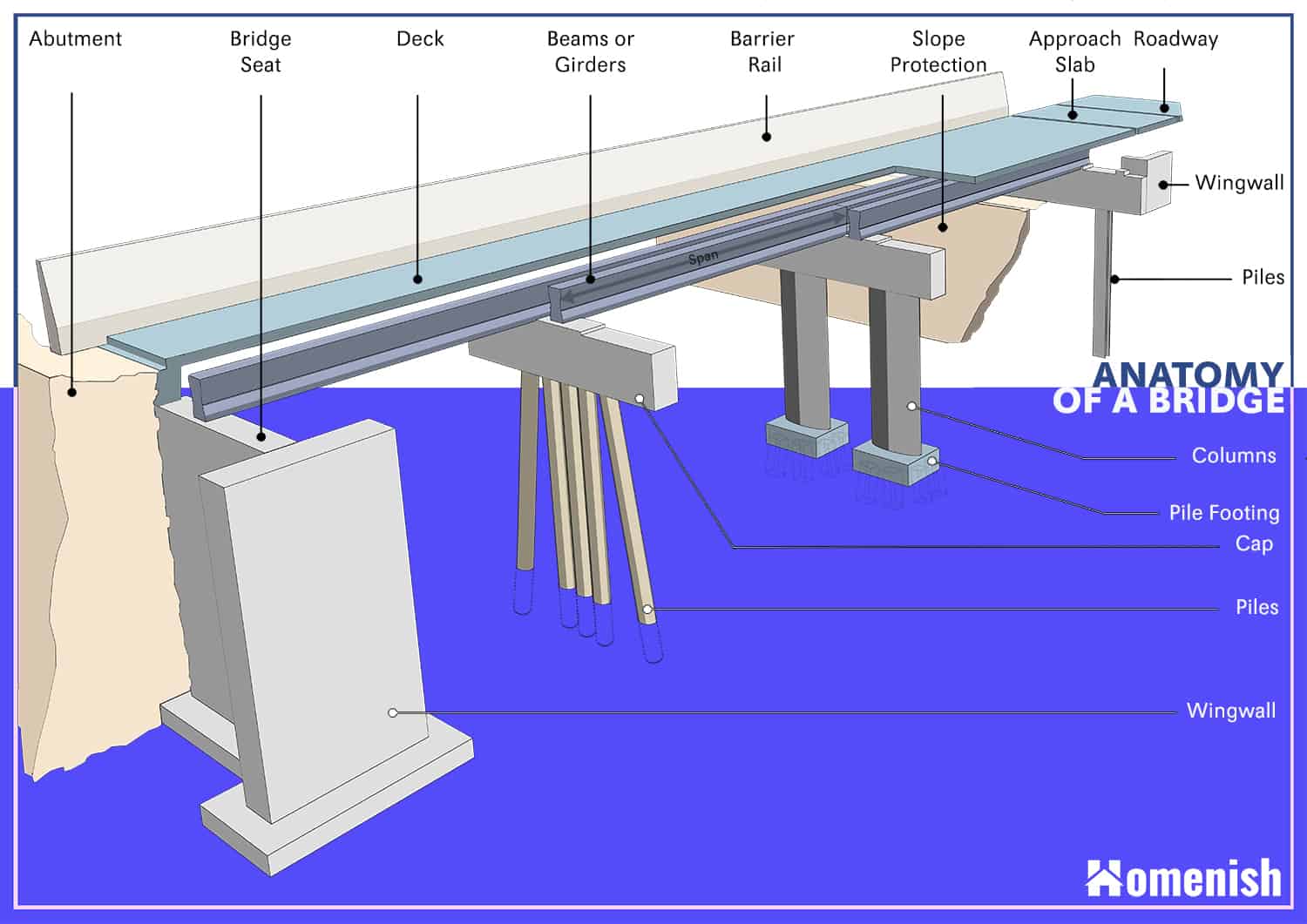 At first glance, bridges may seem like simple, easy-to-understand structures. But, as we all know, looks can be deceiving. In reality, bridges are complex systems that use a variety of different elements to hold up tons of traffic. While it’s easy to get overwhelmed by the parts that make up a bridge, you can easily understand them all by breaking them down into these six different categories:

If you only knew how many parts make up a bridge, you’d be surprised. And with the news that several bridges in the US are in danger of collapse, you may be even more surprised to know that the parts of a bridge are integral to its safety. Bridges are made up of piles, piers, and spans. Elements of a bridge may include: Mechanics: Most bridges will also be covered in a protective coating. The downfall of a bridge is overloading. Piles only have a limited capacity for weight. The average capacity is two-thirds of the maximum weight the bridge will bear.

There are different types of bridges, such as. B. Beam bridges, arch bridges, cantilever bridges, suspension bridges, truss bridges, cable-stayed bridges, and coupled arch bridges. Over the centuries, many bridges have been built. For example, the Golden Gate Bridge in San Francisco, which opened in 1937, was built in four years and is one of the most famous bridges in the world.

In this article, we will look in detail at the different parts of the bridge and how they work, to give you an insight into how many bridges have stood the test of time.

History of the bridge

Man has always needed a quick way to overcome natural obstacles on the road, such as bodies of water, valleys and rough terrain. The concept of bridge building has been around since time immemorial. In ancient times, people in Mesopotamia began to build bridges from artificial materials.

Eventually, through continued innovation, the engineers of ancient Rome began to use fractured volcanic rock to make mortar. This was the first step in a great revolution in bridge building, for this invention enabled the engineers of ancient times to build bridges far more imposing, stronger, and larger than any civilization had ever seen. Soon all other parts of the world began to build similar bridges, powerful roads and connections to distant places.

Today, impressive bridges of high quality can be found all over the world.

Below you will find a detailed diagram with all the bridge parts.All bridge parts – 3D Diagram

Piles can be made from a variety of materials; which material is used generally depends on soil stability, soil type, bearing capacity and other considerations. In general, piles are installed to support the original foundation of the bridge. The posts ensure that the load or weight resting on the bridge is evenly distributed on the ground. This makes the bridge much more stable.

Curved is simply the name used to designate composite posts and covers. The foundations of each bridge consist of different deflections.

These are the retaining walls at the foot of the bridge. The abutments, which are usually made of reinforced concrete, serve as vertical supports at the converging ends of the bridge and can absorb enormous horizontal forces.

These are supports attached to various spans of the bridge to support the structure against vibration and other forces.

This is the supporting part of the bridge pillar; it is usually made of solid stone or concrete; its function is to distribute evenly the loads concentrated on the surface of the pillar. The covers of the pillars are also called main posts.

Bridge bearings have the task of transferring the stresses or loads from the road surface to the substructure. They allow for transverse and horizontal movements between the substructure and superstructure of the bridge. There are two main categories of bearings used in bridge construction: fixed bearings and support bearings. Fixed bearings allow limited progressive and rotational movements, while split bearings allow all progressive and rotational movements. There are various types of bearings for bridge construction, including: ball bearings, disc bearings, cushion and tilting shaft bearings, plain bearings, elastomer bearings, cam bearings and roller bearings

The trusses consist of a series of triangular elements that serve to distribute the load and the bending moments on the bridge. There are several types of lattice beams, including cantilever lattice beams, single lattice beams and suspended lattice beams. Trusses are essentially load-bearing structures, usually consisting of several triangles, which can be made of metal or wood. The trusses have a triangular shape because the triangle cannot be deformed by tension. The result is that the trusses have a stable shape to carry the enormous external loads over a large span.

Decks are usually made of metal or concrete. They can withstand the direct loads of traffic on a bridge, so they are robust. Bridge decks include bridge drainage systems, walkways, sidewalks, curbs, driveway slabs and widening elements.

Barriers are protective and safety devices generally fitted to the sides of the respective bridge decks. They may be made of different materials, e.g. B. Made of rope, concrete, rails, ramps, or specially designed facilities, ropes, rails, or ramps.

There are abutments at each end of the arch bridge. Arched bridges are generally shaped like an arch. These arches control the load on the bridge by transferring the weight to the horizontal thrust controlled by the abutments on either side. Arch bridges are known for their strength. There are three main types of arches used in arch bridges, namely the three-hinged arch, the two-hinged arch and the fixed arch.

This source has been very much helpful in doing our research. Read more about bridge components diagram and let us know what you think.

What are the parts of a bridge?

A bridge is a construction that allows people and vehicles to cross an expanse of water, or any gap in a land mass, without having to endure wet feet. There are many different types of bridges, depending on their use and the materials they are made from. For example, some bridges are made of steel and concrete, while others are made of wood or rope. Bridges can be simple: (e.g.) a log across a stream, or complex: (e.g.) the Brooklyn bridge in New York. There are many different parts that make up a bridge like the deck, the substructure, the supports, the piers, abutments and many more. In this article I will walk you through the parts of a bridge and tell you what they are.

What are the two components of a bridge?

A bridge is a structure built to span an obstacle such as a body of water, valley, or road, for the purpose of providing passage over the obstacle. There are many different designs that each serve a particular purpose and apply to certain situations. Two important components of a bridge are the abutments and the piers. A bridge is a structure built to span a physical obstacle without closing the way underneath it. Though the use of the bridge is most common in cases where the obstacle is water, a bridge can also be used to span a canyon, a crevasse, or an obstacle in the form of a river, road, rail line, or railway. Bridge designs must meet safety standards, and are analyzed to ensure that they can carry the appropriate loads and absorb the expected environmental stresses. Since bridges often need to last for decades, even centuries, they may need to be carefully maintained. The two basic components of a bridge are the deck and the superstructure, although a more complex structure may also be called a bridge, such as a cable

How many bridge designs are there?

There are numerous different bridge designs, from simple concrete beam bridges to complex suspension bridges spanning miles. The most basic bridge is a beam bridge . Beam bridges are made of wood, stone, reinforced concrete, or steel, and they span small gaps. The longest beam bridge is the Lake Pontchartrain Causeway, which stretches almost 24 miles across Lake Pontchartrain in Louisiana and is made of concrete and steel. There are many designs of bridge that have been designed over the years. The only problem is that some of these designs are not used that much anymore. In fact, there are over one thousand different bridge designs that have been created and used throughout the history of mankind. Most of them are still in use today, but some have been replaced by newer designs. November 29, 2022 390
Seeing Through: Things You Should Know Before Replacing Your Windows

October 28, 2022 298
What You Should Know Before Hiring Foundation Repair Contractors