Dome Roofs – What They Are, History, Pros/Cons, Costs

Dome design has a long history in the building world and is in fact a style of different types of architecture around the world. Domes were widely used in the Persian, Roman and Byzantine empires, as well as in the Islamic empire and even during the Italian Renaissance.

In its basic form, the dome is a hollow hemispherical structure. Domes evolved from arches that were originally used for small structures such as tombs and huts; but as building and design strategies became more prominent, they were eventually used to represent large structures, including cathedrals, government buildings and, more recently, recreational structures such as stadiums.

What is a domed roof? 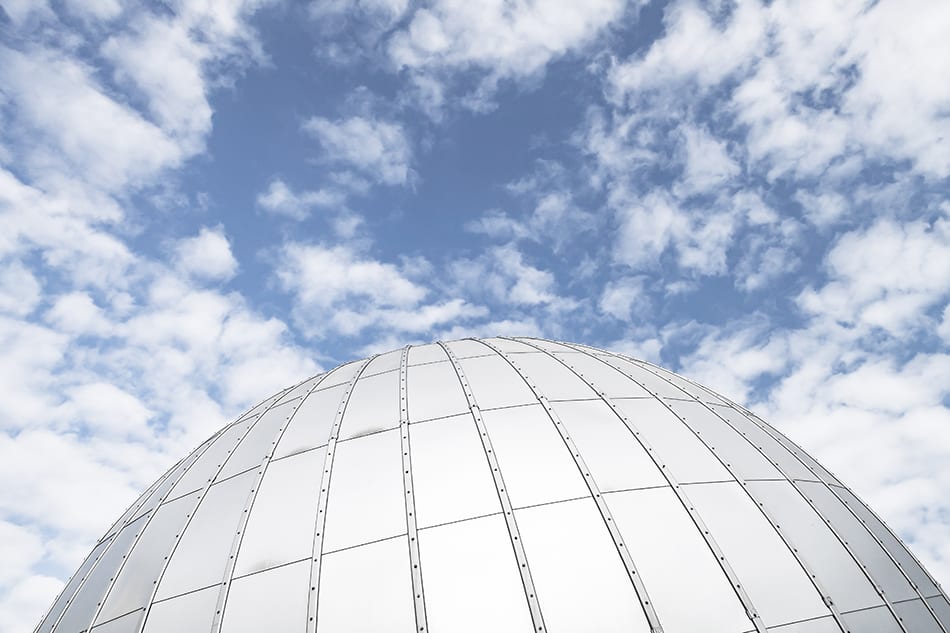 A domed roof, as the name suggests, is a roofing material that is shaped like a dome. By using the technical and stylistic concepts of the arch and its rotation over a 360-degree radius, a dome-shaped roof can be developed.

Known as the “kings of all roofs,” domes cover some of our most important buildings. Domes are fully curved buildings, with no corners or angles, and they delineate a huge area without the use of columns. Regardless of their slender nature, domes are among the strongest structures available today.

Columns required for most roofing systems

Before the era of domes, buildings were exceptionally rectangular in shape. Almost all ancient buildings had a roof supported by a group of columns. These columns kept the heavy roof from collapsing, but left little room for the open interior.

Soon, ancient engineers began to explore the arches. In 100 AD, creative Roman architects gave the arch a rounded shape and discovered that it became even stronger in the form of a monolithic dome. Builders then began to construct Christian churches and Muslim mosques in this magnificent and entirely new style.

The oldest known domes were made of stone. And the oldest stone dome, the Pantheon, weighed so much that engineers carved detailed shapes, called boxes, into the walls to reduce the weight of the massive structure. They also drilled a hole, called an oculus, in the upper portion. This hole provided a daily light show and is still one of the reasons the Hall is so famous.

As people built taller domes, they became much heavier. In 532 AD, engineers realized that they could make their domes lighter by digging pieces between the arches. In this style, sunlight penetrated the dome but did not destroy the structure. An example of this style is the Mihrima Mosque. It was built in 1555 by a great designer named Sinan and has 161 windows!

Often they turn out to be too heavy. For example, when the dome of St. Peter’s Basilica began to crack in the 1700s, Vatican engineers connected many iron rings, what we now call tension rings, to keep it from collapsing. Their emergency repairs worked and became a new technique in the construction of blast furnaces.

In a mission to height, creative engineers devised some techniques. In the early 15th century, Roman engineers began to build double domes in one building to give the impression of an even larger structure. The dome of the U.S. Capitol, designed in 1793, owes its height to this engineering trick.

The U.S. Capitol is also one of the first cast-iron domes assembled for this purpose. The transition from heavy masonry to these metal ribs in the late 1700s significantly reduced the weight of domes being developed around the world.

A later innovation would change dome design forever. In the 1950s, an extremely new style – geodesic domes – changed the way civil engineers thought about dome construction for the first time in 2,000 years. Geodesic domes, developed by American designer Buckminster Fuller, are partially spherical structures composed of an arrangement of triangles rather than a classic grouping of arches.

Today you see geodesic domes in an almost unlimited variety of designs and shapes. One of the most famous domes in the world is the Disney Epcot Center.

A new era of domed structures with retractable roofs (like the SkyDome in Toronto) is becoming a popular option for sports arenas around the world.

Why choose a domed building? Here are the benefits of building a domed home or commercial building.

In the long run

Standard domes are highly efficient, arch-like structures. This is because they are self-supporting and are stabilized by gravity to keep them compressed. The weight of standard domes creates both downward and outward forces. The downward tensile force must be transferred to the structures, while the outward tensile force must be maintained to prevent the dome walls from collapsing. The necessary strength is provided by the mass of the walls, by buttresses, or by an emergency device such as a side ring, chain, or rope net.

Domes can be built from a variety of materials, from standard masonry and concrete to cast steel, wood and cast iron. Your choice will depend on the size you want your dome to be and how you want it to look, both inside and out.

They can cover large areas and do not require support pillars, allowing for large open spaces underneath. Instead of erecting load-bearing walls, the decision to arrange rooms depends solely on your preferences. You are not limited in any way in the design of your floor plan.

One would think that a large open space would lead to more heating or cooling costs. The reverse is also true: because of the close compression of the materials in the hull structure, there is very little temperature change due to external influences. And if you keep the floor plan as open as possible, you don’t have to worry about air circulation. Each zone heats and cools evenly without the need for a complicated system of ductwork.

With a dome, you don’t have to worry about replacing shingles or a rusty metal roof. You won’t have to clean the gutters or brush the leaves off your roof. You don’t even have to worry about snow accumulating on your roof. The shape and materials of the dome take care of all that. Plus, the structure of the dome is so sturdy that if it is damaged, you can just replace it on the spot.

Not as expensive as you think.

The construction of a dome can be more expensive than other types of roofs, simply because it is a unique method of construction. Not all contractors or anyone with the experience or comfort to erect this type of building are specialists. This increases the cost.

What brings the cost down is the equipment. Because domes are so cleverly designed, they require fewer materials than more traditional buildings. Of course, material costs depend on how you plan to use them and the size of your building.

In highly manageable residential construction, a roofer may encounter flashings that differ from the typical roof. Compliance with regional building codes can be a challenge because roofing products are manufactured for angular building forms.

With the curved roof fold, basic building materials are reconfigured for specific curves. Some materials and components can be custom made, although in either case product and labor costs increase.

The eccentric look may also lead neighbors to want a more standard aesthetic.

The resale value of your home may be affected by a non-standard domed roof, as buyers looking to invest a few hundred thousand dollars in a new home may prefer typical, durable designs.

What materials are used in a round roof system?

Dome roofs have actually been developed for a long time from many materials. Stone, adobe, wood, copper and other metals, plastic, ice, glass, ceramic, fiberglass and concrete have actually been used to make a dome roof. The material from which the dome is made depends on the environment and the aesthetic chosen.

What is the price of a monolithic dome house?

Monolithic domes come in all sizes and shapes, so specific prices are usually given on a project-by-project basis only. However, most companies use a price per square foot. This rate can go up or down depending on the different elements, but it gives you a starting point.

Hulls and floors only: typical cost is $65 per square foot of floor. This cost applies to a monolithic domed house resting on a concrete floor that has been installed.

The best way to begin the process is to conduct a feasibility study. This is a cost-effective way to review YOUR style choices and develop a numerical simulation with an accurate costing.

How much does a domed roof cost?

Prefabricated dome houses: they cost about $130 per square foot. For example, the shell of a 1,000-square-foot dome house costs about $60,000; when fully completed, it will cost about $130,000. The best way to begin the process is to conduct a feasibility study.

What are the disadvantages of geodesic domes?

They are cost-effective: as mentioned earlier, domed houses are ideal for reducing electricity bills. But they also save money on materials. The shape of a dome house means a much smaller footprint than a regular house, and only half or 25% of the materials are needed to build it.

What are the must-have outdoor kitchen items you need to make a…
Update : 30. October 2020 | Categories : Garage There are types…

The Tuscan Style of architecture is considered to be the oldest form…
Update : 11. November 2020 | Categories : Garage Collecting all screwdriver…